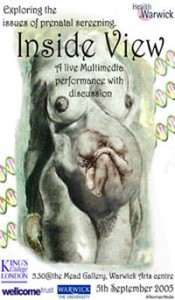 “Inside View” was a one woman show performed by Kathy Joyce and set in a multi–media live environment created by Saul Cross. It was developed from ESRC funded research on the Experiences and Dilemmas of women and health professionals in relation to pre-natal genetic screening (Lewando Hundt et al 2010).

This was a multi-media live theatre production on the dilemmas and issues of pre-natal screening. The play was about the seemingly routine experience of women attending a foetal scan generally at 12 weeks. The scan is often not seen as the screening process that it is and can potentially leave women and their partners with huge decision making dilemmas on a scale never experienced in the lives of most of us. Whether or not to terminate a pregnancy.

The script was developed by Tinch Minter from the summaries and the visual material was gathered by Saul Cross and developed in consultation with, and utilising some material from the biochemist and the clinic site along with research material on the subject. 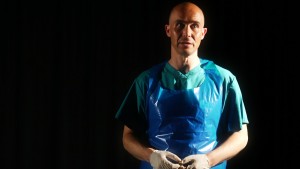 The development of the performance was an iterative process involving adaptation of the script through a dialogue between the director, social scientists, and biochemist. The performances of a one woman show performed by an actor portraying every woman were followed by a panel discussion responding to questions from the audiences in relation to both the policies, practices and ethical dilemmas of prenatal screening and also the transformation of research data into performance.

The storyline involved a pregnant woman attending a prenatal screening clinic, and followed her physical and emotional journey through the clinic. A decision was taken to leave both the woman and the audience with unresolved possibilities and outcomes as a way of focusing on every woman’s dilemma and choices.

“Like this mug – here’s a print of the potter’s thumb. And here’s a bit of clay peeping through where the glaze didn’t stick – that’s why I brought it. It’s individual. Even the potter didn’t know for certain how the pot would come out… All the time it’s in the kiln, it changes, becomes more itself…” (excerpt from script Inside View) 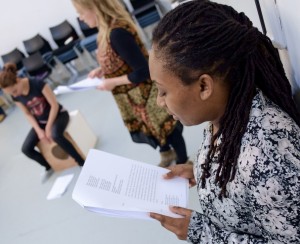 The performance was played against a back projected visual environment.

The use and reference to time both in the script but also in the visuals and sound track enhanced this theme. Set into the digitally created backdrop of the waiting room there was an interactive clock that synchronised to the duration of the time spent by a pregnant woman in a one stop first trimester screening clinic. This was accompanied by the sound of time ticking on in the sound track, and within the theatre piece were moments when time was suspended to allow the audience to have insight into the internal dialogue of the pregnant woman.

The visualisation of the foetus using an ultrasound scan was one the main motifs and informed the title, this also informed the choice to use digital technologies and to set the production entirely within a digital environment. 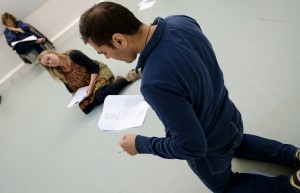 The ‘Inside view’ performance was funded by the Wellcome Trust with the intention of stimulating and informing debate about prenatal screening during early pregnancy. The dilemmas and questions were explored from the perspectives of both health professionals and pregnant women. The performance raised questions about some of the social, ethical and cultural issues and stimulated debate. Download a research poster about this project.

The project provided a wealth of rich narrative data from health professionals, women and their partners about prenatal screening, which was used to inform this performance.

“To see the problems mirrored by a real person helps to identify and analyse issues of new technologies.”

GP: “I refer pregnant women automatically for screening – from now on, I will discuss it with them”

Additional members from the ESRC project