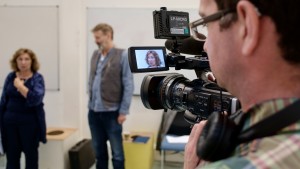 Our first project was called Xiseveseve (coming together to share).

Claudette worked with the academic leads: Dr Maria Stuttaford and Professor Gillian Hundt. In the UK introducing them to the concept of Forum theatre. This was adapted to feedback the research findings to the people of the villages who had contributed to them. The play offered insight and understanding into the personal dilemmas of people who had suffered a stroke and its local relevance enhanced its impact.

The theatre made for our first project was specifically created to feedback the data and research findings about a Stroke Prevention Initiative in South Africa. Understanding the social context of Stroke is complex and Theatre an ideal medium for retelling narratives and inviting audience intervention. This play was performed by the field workers themselves and presented informally in the villages where the research had taken place.
Santé Theatre is also driven by the desire to create theatre for those who might not usually attend mainstream theatres or art centres.

Santé Theatre has no borders and finds its forms in the existing cultural expression of the communities that create it. It offers the means of creating an analysis of the economic, cultural and social conditions, particularly of the very poor.

For the Xiseveseve project it was appropriate to position the audience as the extended family of the protagonist (the stroke sufferer) and invite their counsel through the drama.

This became a model for further work.